The building of a solar cell

Step 1: The silicon dioxide of either quartzite gravel or crushed quartz is placed into an electric arc furnace. A carbon arc is then applied to release the oxygen. The products are carbon dioxide and molten silicon. This simple process yields silicon with one percent impurity, useful in many industries but not the solar cell industry.

Step 2: The 99 percent pure silicon is purified even further using the floating zone technique. A rod of impure silicon is passed through a heated zone several times in the same direction. This procedure "drags" the impurities toward one end with each pass. At a specific point, the silicon is deemed pure, and the impure end is removed.

Step 3: Solar cells are made from silicon boules, polycrystalline structures that have the atomic structure of a single crystal. The most commonly used process for creating the boule is called the Czochralski method. In this process, a seed crystal of silicon is dipped into melted polycrystalline silicon. As the seed crystal is withdrawn and rotated, a cylindrical ingot or "boule" of silicon is formed. The ingot withdrawn is unusually pure, because impurities tend to remain in the liquid.

Step 4:From the boule, silicon wafers are sliced one at a time using a circular saw whose inner diameter cuts into the rod, or many at once with a multiwire saw. (A diamond saw produces cuts that are as wide as the wafer—. 5 millimeter thick.) Only about one-half of the silicon is lost from the boule to the finished circular wafer—more if the wafer is then cut to be rectangular or hexagonal. Rectangular or hexagonal wafers are sometimes used in solar cells because they can be fitted together perfectly, thereby utilizing all available space on the front surface of the solar cell.

Step 5:The wafers are then polished to remove saw marks. (It has recently been found that rougher cells absorb light more effectively, therefore some manufacturers have chosen not to polish the wafer.)

Step 6: The traditional way of doping (adding impurities to) silicon wafers with boron and phosphorous is to introduce a small amount of boron during the Czochralski process in step #3 above. The wafers are then sealed back to back and placed in a furnace to be heated to slightly below the melting point of silicon (2,570 degrees Fahrenheit or 1,410 degrees Celsius) in the presence of phosphorous gas. The phosphorous atoms "burrow" into the silicon, which is more porous because it is close to becoming a liquid. The temperature and time given to the process is carefully controlled to ensure a uniform junction of proper depth. A more recent way of doping silicon with phosphorous is to use a small particle accelerator to shoot phosphorous ions into the ingot. By controlling the speed of the ions, it is possible to control their penetrating depth. This new process, however, has generally not been accepted by commercial manufacturers.

Step 8: After the contacts are in place, thin strips ("fingers") are placed between cells. The most commonly used strips are tin-coated copper

Step 9: Because pure silicon is shiny, it can reflect up to 35 percent of the sunlight. To reduce the amount of sunlight lost, an anti-reflective coating is put on the silicon wafer. The most commonly used coatings are titanium dioxide and silicon oxide, though others are used. The material used for coating is either heated until its molecules boil off and travel to the silicon and condense, or the material undergoes sputtering. In this process, a high voltage knocks molecules off the material and deposits them onto the silicon at the opposite electrode. Yet another method is to allow the silicon itself to react with oxygen- or nitrogen-containing gases to form silicon dioxide or silicon nitride. Commercial solar cell manufacturers use silicon nitride. 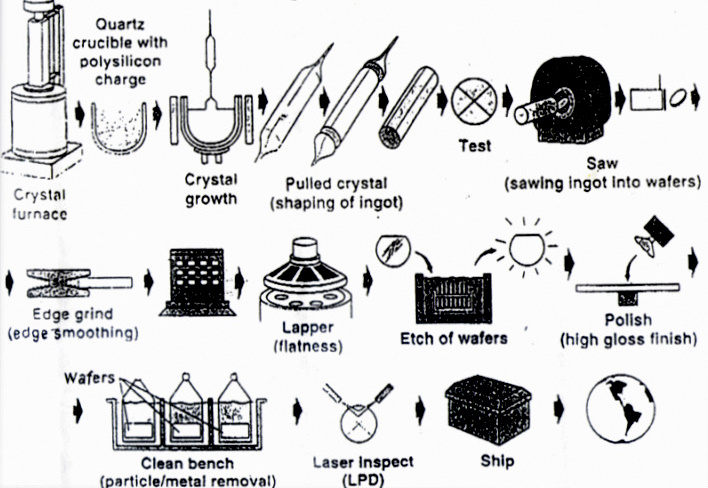 Solar panels have the image of green and good.
But is that true in every aspect?

Studies show that production takes more resources than accounted for. Pollution, transport, installation and recycling are often not very documented. Also it differs on the location of production and deployment. Waste of production includes toxic elements, pollution of clean water, mining operations. Depending on the case solar panels can be beneficial (*1)

Solar energy is largely subsidized. Because of this it gets beneficial to consumers. The drawback is that the price is not a measurement of real cost of production (and possibly use of resources). (*2)